The Wall Street we all knew is dead. It has been replaced by high frequency trading (HFT).

With an estimated 50 to 60 percent of US trading volume (equities and futures) being made by HFT firms, modern markets have become unrecognisable, and speed rules this strange new land. The fastest execution times are below 10 micro-seconds or 0.00001 seconds (it takes 0.4 seconds to blink your eyes), this means that:

"If supermarkets ran HFT programmes, the average household could complete its shopping for a lifetime in under a second."

On 19 June 1815 Nathan Mayer Rothschild used the fastest horses to carry news from the battle of Waterloo so that he could react first in the stock market. Modern HFT is based on similar concepts but instead of horses, firms use the fastest computers, fibre optic cables and microwave towers to edge out competition through speed.

However with great power comes great responsibility. This new speed has enabled new forms of unfairness. For example, latency arbitrage and event arbitrage, which involve exploiting the fact that one can react first to news events and momentary differences between market prices. You can plunge deeper down the rabbit hole and find compelling arguments that HFT firms can exploit computer signals between markets and exchanges, enabling them to get wind of a large institutional order and race to buy the remaining shares before the initial offer signal arrives. HFT firms could then sell that offer for a higher price and a profit (front running). Arguably, this and other methods are damaging to institutional investors such as pension funds. On the other hand, HFT advocates will often retort that HFT reduces trading costs and spread size. This moral merry-go-round aside, my view is that the more troubling symptom is HFT's link to volatility and liquidity.

To put in the fastest trades, HFT firms use computer algorithms - programs that react to information in designated ways, i.e. if the price of the dollar falls buy euros. They operate on staggering scales with pages of complex code. However, these algorithms can have exploitable impacts on markets. For example take momentum ignition. If you fire 100,000 buy orders and cancel them before they are fulfilled (quote stuffing) it might move the price of a stock up because of the noise in the market - the noise being mistaken for actual buying and selling activity. You can have the same effect by selling to yourself (an illegal activity called wash trading), profiting on the artificial rise in price. This and large volumes of small orders (used as a financial sonar, pinging for information) have had significant impacts for liquidity.

As many HFT firms are under no obligation to provide liquidity constantly, it means that in times of market stress liquidity dries up. In effect this liquidity source is not there when needed most. Arguably this also increases volatility, as the market lows are made lower. Imagine an auction house where you are trying to sell. If 60 percent of the room leave just before you sell (i.e. times of market stress), you're left with an empty auction which could have been filled with buyers, but it is too late. 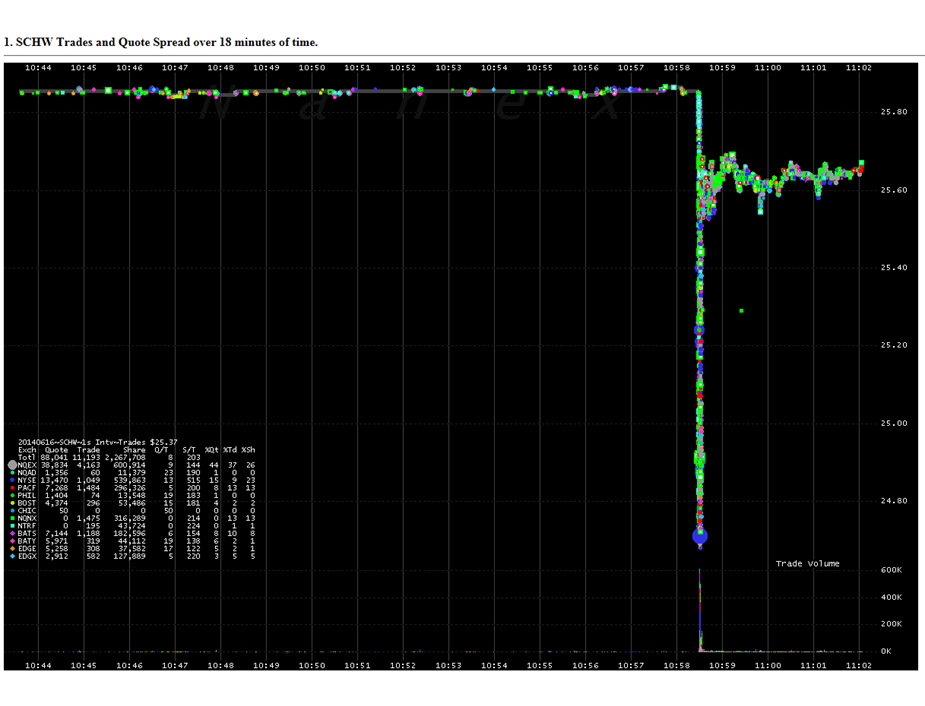 At the 75th millisecond of the 44th second at 2:42pm on the 6th of May 2010 a starburst of orders exploded onto US markets. The Dow Jones began to fall, and fall fast. More than 1000 points down, one trillion dollars had been wiped off markets (an amount equal to the net worth of twenty Mark Zuckerbergs). It was Armageddon. Apple and Sotheby's shares were trading at $100,000 a share, from $250 and $35. CenterPoint Energy and Accenture were trading at 5 cents from $13 and $35. Then slowly markets recovered and the world breathed a collective sigh of relief.

This was the infamous 'Flash Crash'. It was over in 36 minutes but the fallout remains. Opinion is still divided as to the cause, but indisputably HFT had a hand. Arguably it was the main cause - HFT algorithms trading with each other at impossibly fast speeds, driving prices berserk.

With the extreme market turbulence in Q1 2016, finding a clear culprit shouldn’t be challenging. Especially given the rise in volatility rates, a rise with peaks matching 2008, when the world was staring over the edge of the cliff post-Lehman bros. I would suggest that the climate of macroeconomic fear that shaped Q1 2016 had such startling market impact because of the velocity gained through the speed and frequency of modern trading. Take as an example the pound dropping to a seven year low after Boris Johnson announced his support for the Brexit "no" campaign, it seems there is an obvious disparity between events and their impacts.

Yale Professor C.Perrow suggested in Normal Accident Theory that in complex tightly coupled systems accidents are inevitable. Modern markets are the most tightly coupled and complicated in history and with the rise of HFT we must all confront a hard truth - that with the speeds we are talking about, the next flash crash may have crippled markets before we can even blink.