Arrests made by HMRC fall to five-year low

The number of arrests of taxpayers made by HMRC for suspected tax evasion has fallen to a five-year low of just 782 in the last year*, says RPC, the City-headquartered law firm.

RPC says that the lower number of arrests may be because HMRC is now taking a less aggressive approach after being hit with a number of ‘wrongful arrest’ claims brought by taxpayers.

Adam Craggs, partner at RPC, says “There has been some criticism of HMRC for being too ‘trigger happy’ in the past – fewer arrests could be a sign that HMRC is now exercising its powers of arrest more responsibly and in accordance with the law.”

“If HMRC has taken that criticism on board, and is now being more thorough before deciding to make an arrest then that is to be welcomed.”

“Being arrested can have a seriously detrimental effect on a person's life. They are likely to face difficulty obtaining a visa to travel to certain countries and it may well have employment implications, for example, if they work in financial services. HMRC must therefore ensure it is exercising proper diligence and acting in accordance with the law when arresting someone.”

RPC says that HMRC cannot arrest a person simply because they have the power to do so. Parliament has provided that certain conditions must be satisfied in order for an arrest to be lawful. Typically, a taxpayer who is under investigation for tax evasion will agree to attend a voluntary interview under caution with HMRC. In such circumstances, where the taxpayer is cooperating, HMRC should not ordinarily exercise their power of arrest.

HMRC was given the power of arrest following the merger of the Inland Revenue and HM Customs and Excise in 2005 – originally only customs officers had a power of arrest. HMRC now has over 1,500 officers with the ability to arrest a person.

Adam Craggs continues: “It is to be hoped that the fall in HMRC arrests is as a consequence of HMRC having a better understanding of their power of arrest and when it is appropriate to exercise that power. Getting it wrong can be costly for HMRC.” 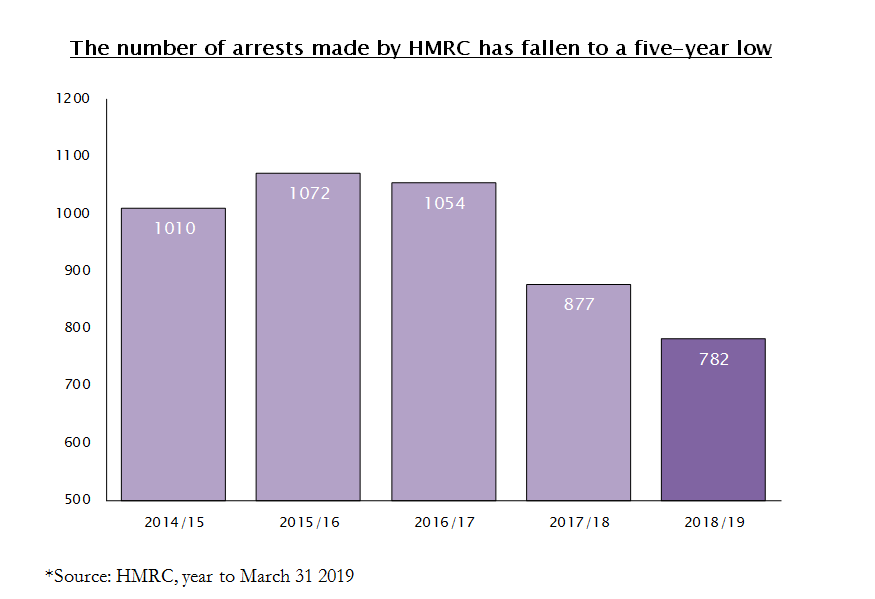