The expansion of the UK craft spirits industry shows no sign of abating, with the industry filing a record number of trade mark registrations in the last year, says RPC, the City-headquartered law firm. The number of new trade marks registered for spirits jumped 12% in the past year, with 2,482 filed in 2018, up from 2,210 in the previous 12 months.

RPC says the number of new spirits brands and individual products are both rising as the major global drinks manufacturers respond to the boom in craft spirits, pioneered by independents, by launching innovative flavours and unusual colours.

Flavoured gins enjoyed a record year in 2018, with a 751% increase in sales in the UK*. This trend towards a proliferation of varieties has spread to other spirit types, such as rum, whiskey and tequila. Each new sub-brand and product line creates the demand for trade mark protection.

As well as protecting their market share from the encroachment of independent distillers, the major distillers are also looking to capture new markets. Brown-Forman, for example, has attracted a younger, female customer base with Jack Daniels Honey, compared to its original product, which typically appeals to an older male demographic. Similarly, Gordons has made inroads with non-gin drinkers with its Premium Pink variety, which took just over a year to sell 1 million cases.

RPC’s Head of Food & Drink, Ciara Cullen says of the research: “Consumer demand for new flavours and experiences has contributed to increased innovation and diversification of product lines – we are seeing all kinds of exciting new infusions.”

“A lot of multinational distillers are now bringing out extra lines and limited runs of niche drinks, to compete with independents that have started to bite into their market share.”

“Failure to adequately protect that intellectual property can result in brand value becoming diluted by rivals launching copycat products. Should that end in litigation, having trade marks in place is crucial.” 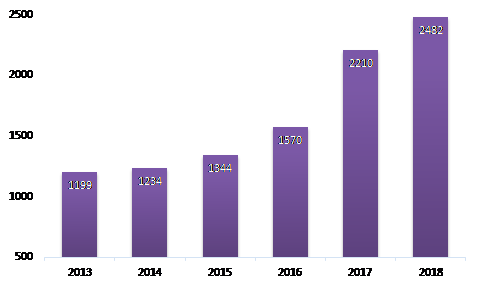