RPC – the broad-based City-headquartered professional services firm – has elected James Miller as Managing Partner. He succeeds Jonathan Watmough, who had been in the role for almost nine years.

At the same time, Rupert Boswall – a Partner in the firm's Commercial Litigation team – has been re-elected to his role as Senior Partner for a second term.

Until his election, James was Head of the Insurance Group, and has been at RPC for almost 22 years, the past eight of which he has been a member of the firm's management board. Dual-qualified in both England & Wales and Hong Kong, James' practice has focused on complex insurance coverage disputes and the defence of liability claims in the UK and abroad, with a particular emphasis on major property losses.

James started his career as a registered osteopath – during which he acted as President of the Osteopathic Association of Great Britain – before joining RPC as a trainee in 1995 to take up a career as a lawyer. He made Partner in 2003.

The Managing Partner at RPC is responsible for setting and executing the strategic direction of the firm. The role doubles as the chair of RPC's Management Board, which is currently made up of Partners and senior Business Services professionals from across the firm.

Speaking of his appointment, James said: "RPC has been on an exceptional run and I'm looking forward to helping lead the firm onto even greater things.

"We have real momentum. My priority is to build on that across RPC and continue to develop a unique, independent, and profitable leading professional services firm – a firm that is focused on high quality work, anchored in our core discipline as a law firm.

"Our growth has been characterised by long-term investment as opposed to chasing short-term gains. We don't obsess over the annual accounting model – it's too limiting. It's a strategy that over the last five years has seen us deliver 11.5% compound growth in both revenue and, most importantly, profit, almost all of which is organic. That's great testament to the legacy that Jonathan has left behind."

Since 2011, RPC has opened three major new offices – in Hong Kong, Singapore and Bristol. In 2015 the firm launched a successful insurance management consultancy business, and bought a market-leading complementary software product later that year. In 2016 RPC entered a joint law venture with Premier Law, doubling its size in Singapore.

During the same period the firm has won Law Firm of the Year three times. And, since 2009, it has been named Best Legal Adviser every year, coming out first ahead of all other law firms twice in that period.

"It's been an exhilarating journey, and one I'm thoroughly looking forward to continuing," says James. "It's a challenge, of course, but all the more exciting for that.

"Importantly, at the heart of all this success are our people. RPC has a very strong and unique culture, built on long-term relationships with clients and colleagues alike and supported by a working environment that is collaborative, creative and supremely client focused. Whatever we do from a business point of view over the coming years I'm unwavering in my commitment to maintaining and fostering that culture."

James takes up the position with immediate effect. 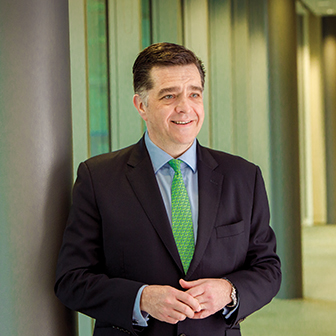 We have real momentum. My priority is to build on that across RPC and continue to develop a unique, independent, and profitable leading professional services firm. James Miller, Managing Partner