166 orders to freeze accounts were issued by HMRC in 2019/20, up 177% from 60 the previous year. In addition, the total amount forfeited, and the number of forfeiture applications have increased fourfold, from the previous year.

In January 2018, AFOs and FOs were introduced into the Proceeds of Crime Act 2002 (POCA), along with a raft of controversial investigative powers, by the Criminal Finances Act 2017. Regulatory bodies, including HMRC, now have the power to apply for AFOs to prevent money being withdrawn from or deposited into accounts linked to suspected criminal activity.

FOs (issued by the Magistrates' Court) and Forfeiture Notices (issued by Regulatory bodies, including HMRC) are used to directly seize money that is suspected of having been obtained by unlawful conduct. Prior to these powers coming into effect, HMRC, and other regulatory bodies, had few options available to it for seizing money directly from bank accounts without first having to charge the person suspected of wrong doing. These powers allow HMRC to apply to the court to freeze and forfeit bank accounts without having to bring an allegation of criminal wrong doing to trial.

RPC says that it expects AFOs and FOs to be used by HMRC to seize money in accounts of suspected fraudsters relating to the Government’s £350bn coronavirus stimulus package. Businesses suspected of abusing the Coronavirus Job Retention Scheme could have accounts frozen for up to two years.

RPC says that AFOs and FOs are powerful weapons in HMRC’s arsenal and enable it to seize the funds of suspected criminals and their associates. AFOs can be used for amounts as low as £1,000 and whilst Unexplained Wealth Orders can be used to compel suspected criminals to reveal the source of their wealth, they require at least £50,000 to be in question.

RPC says that the threshold for obtaining both AFOs and FOs to seize funds is extremely low. Money may be forfeited if authorities believe that it has been generated as a result of unlawful conduct or intended to be used in unlawful conduct, an argument that can be very difficult to counter in court.

Adam Craggs, Partner and Head of Tax Disputes at RPC says: “HMRC now has extensive powers to seize assets under investigation and it appears to be looking at every opportunity to exercise those powers.”

“Freezing Orders are easy to obtain. The authorities only need to show the Magistrate that they have reasonable grounds to suspect that money has been obtained by unlawful conduct.”

Michelle Sloane, Partner at RPC adds: “The Revenue may well issue freezing and forfeiture orders to businesses and individuals suspected of dishonestly abusing the coronavirus stimulus package, including the 'furlough' scheme.”

“With such large sums of money potentially at risk, HMRC will want to do everything it can to make sure that any money wrongfully claimed is returned to the Government.” 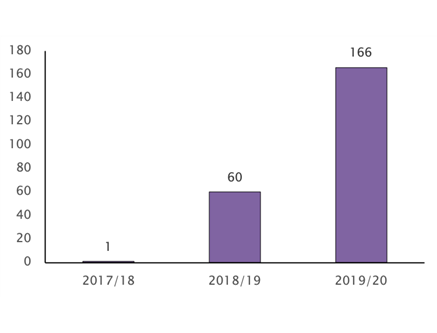