RPC says that the rise has, in part, been caused by supermarkets registering home brand craft beers* as they look to take a market share of the increasingly popular and high margin craft beer sales.

Recent research shows that the number of new breweries** has nearly trebled in five years, increasing from 101 in 2009-10 to 291 in 2013-14, as more and more people are setting up their own craft breweries.

Jeremy Drew, Head of Retail at RPC comments: “The craft beer industry in the UK has really taken off in the last few years with a surge in new independent breweries. Supermarkets are now looking to increase their sales from what is one of the fastest growing food and beverage categories.

“Within the supermarkets there has been a sharp growth in own brand craft beers, which are often white labelled products from independent brewers.

“As different retailers and brewers begin to bump up against each other more frequently the need to protect their intellectual property in this lucrative beverage market becomes more obvious.”

The craft beer market throws up its own IP challenges as consumers particularly favour the choice offered by a wide proliferation of brands and sub brands rather than preferring a small number of flagship products.

RPC says that the jump in the number of beer trade marks being registered is likely to lead to an increase in trade mark disputes as retailers battle for competitive advantage in the market.

Henry Priestley, Senior Associate at RPC adds: “As the craft beer market continues to grow there is more chance of similar brands clashing. It’s a matter of sheer numbers, with the number of new breweries on the rise and new beer names making disputes likely.

“Businesses need to ensure that they are correctly protecting themselves from potential legal issues in the future, which can be both costly and disruptive to business.”

RPC says that the craft beer market in the US, which underwent its renaissance several years before the UK market, has already seen an increase in trade mark disputes- with these disputes fought out both through the courts and social media. If growth of the craft beer industry continues in the UK, then the UK market could well follow a similar path.

Trademark registrations for beer rise by 12% in a year 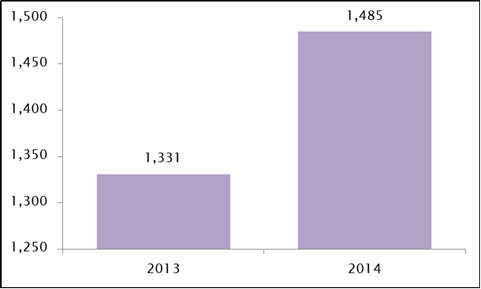