New data published today shows that there has been no let-up in the number of retail businesses entering insolvency, with 1,252 insolvencies in the sector in the last year, up from 1,232 the year before says RPC, the City-headquartered law firm.

Bonmarche went insolvent in October, while high-profile names such as Links of London and Karen Millen did so earlier this year. Retail insolvencies have risen by 16% compared to five years ago.

The administration of Supercuts earlier this month shows that the strain on the high street is not just limited to retailers.

Tim Moynihan, Senior Associate at RPC says: “There hasn’t been any let up of pressure on retailers in the last year.”

“Funding is extremely hard to come by, especially for smaller retailers, whether from traditional lenders or other backers such as private equity.”

“We are seeing a number of insolvencies where existing backers are no longer willing to put in further debt or equity to tide those businesses through the current weak economy. That’s a problem as many need to increase their investment to ensure they can take advantage of the continued shift to e-commerce and survive what may be a temporary reduction in demand.”

“Retailers have also now had six months since the 5% rise in the minimum wage – costs that have to be borne by shops themselves as they have a low chance of passing that cost onto customers.”

“Hopefully there is some good news on the horizon as we get towards a Brexit deal. That said, there are difficulties for the retailers across Europe – for example, Vodafone is planning on closing around 1,000 of its European stores.” 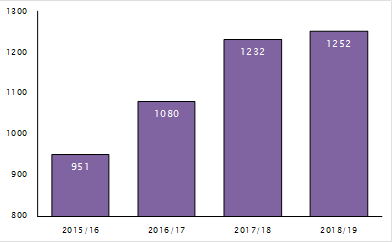