The number of M&A deals targeting retailers has dropped by 23% since last year and is now at a three year low says RPC, the City law firm.

Private equity investors have become increasingly absent from retail sector M&A over the last few years – with PE funds as buyers in only four deals last year down from 13 deals in 2014.

RPC says that the fall in the number of completed deals can largely be attributed to the headwinds the retail sector is currently facing including the continued secular shift in sales to the internet. An increase in uncertainty over consumer spending post the Brexit vote may also have encouraged buyers to hold back.

Whilst economic growth has remained weak a number of factors conspire to push up retailers' costs:


Jeremy Drew, Partner, Retail Group, at RPC says: “There has been a sense over the last year that sellers have been asking too much for retailers that did have great growth stories. That has stopped a lot of M&A deals getting any further than the first round of meetings.”

Karen Hendy, Partner, Retail Group, who recently advised on the sale of the Dunlop brand by its owner Sports Direct to Japanese-based Sumitomo Rubber Industries Ltd, says: “We’ve also seen that disconnect over valuations see a number of retail sector IPOs that were meant to take place put on hold.”

“However, there are signs that prices have become to come down, ending the Mexican stand-off between buyers and sellers.”

RPC explains that, up to now, many retail businesses have, due to hedging their currency rates, not felt the full impact of currency fluctuations. However, as the effect of hedging comes to an end, retail businesses will further feel financial strain due to the fall in Sterling post-Brexit.

RPC says that traditionally retail businesses would have passed their rising costs on to their supply chains but the scope for this is limited as suppliers have already developed relatively lean supply chains carrying little surplus “fat”. Cost increases may encourage retailers to seek further reduced costs by introducing more automation into their logistics chains. 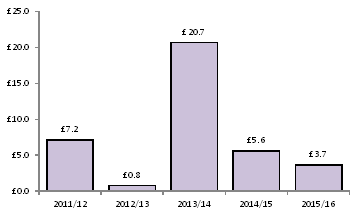 Number of retail M&A deals with a PE Seller

Number of retail M&A deals with a PE Buyer

*Data includes all deals over £1m