There have only been 16 M&A deals in the retail sector in the past year, but Tesco/Booker, Co-op/Nisa deals suggest bumper year to come

There have been only 16 M&A deals in the retail sector in the past year, down 56% from 36 deals the year before, says RPC, the City-headquartered law firm.

RPC adds that the value of retail M&A deals also fell from £3.5 billion in 2015/16 to just £746 million in 2016/17* as Brexit and other pressures on the retail sector has led to investors, especially in private equity, shying away from dealmaking.

However, the law firm says, the pipeline of major deals in the sector suggests that the coming year is likely to show a significant rise in the value of M&A transactions in retail. Potential deals in the pipeline at present include:

RPC says that a potential wave of consolidation in the retail sector is being driven by a wide range of pressures on margins in the industry, including rising staffing costs, the fall in Sterling driving up import prices, and the continued shift to online shopping.


Retailers have already seen staffing costs rise due to the introduction of the £7.50 per hour National Living Wage – which the Government aims to increase to £9 by 2020 – and the Apprenticeship Levy. The potential for a reduced EU workforce post-Brexit is also expected to drive up costs.

RPC adds that consolidation is seen by many in the sector as a vital step in increasing volumes and achieving greater economies of scale, especially within their supply chains. Analysts have suggested that a major driver of Tesco’s approach for Booker is to gain access to its supply chain infrastructure, used to supply more than 5,000 Premier, Londis, Budgens and Family Shopper convenience stores in the UK.

Karen Hendy, Partner and Head of RPC’s Corporate Practice, says: “Pressures on the retail sector may have dampened M&A activity over the past year, but they are now driving a wave of consolidation.”

“The next year is likely to see several multi-billion pound deals as retailers react to margin compression by aiming for sharply increased volumes and greater economies of scale.”

“For major supermarket groups, convenience stores are seen as an area for growth, but in many cases, the logistics infrastructure isn’t there to support them. Retail and wholesale groups with well-developed supply chains are a particularly attractive target.”

“Food retail has been the focus of a lot of M&A activity in recent times as the sector evolves away from large out-of-town stores, and the supermarkets move to bring more wholesale into their supply chains.”

RPC adds that recent M&A deals in the retail sector have included: 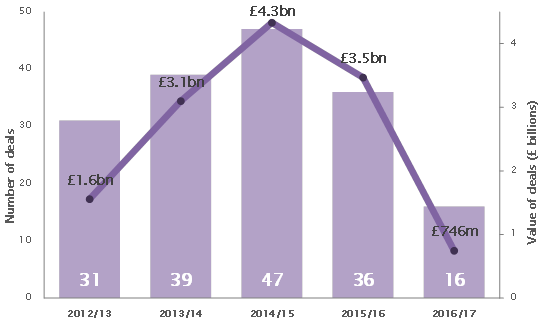