Game theory and the art of litigation settlement (Part 2)

This article is the second in a series targeted at litigators that consider the issue of settlement in litigation through a game theoretical lens.

Article 2 - Settlement where the parties disagree on the case merits and 'what if?' analysis

Impact of disagreement on the merits of the case

In the previous article in this series we considered a hypothetical claim where the claimant and defendant were both in agreement that the claimant had a 50% chance of success. In reality it is quite unusual that that the parties would share the same view on its merits – certainly not at the outset. In this article we will examine the impact on settlement prospects of the parties holding divergent views on the merits of the case.

First, we begin by quickly revisiting the settlement graph produced for the 50:50 case in the first article where the claim value was £1 million and where both parties expect their legal costs to be approximately £300k. One can see that although the settlement acceptance zone narrows as the parties incur costs, it still persists until trial. 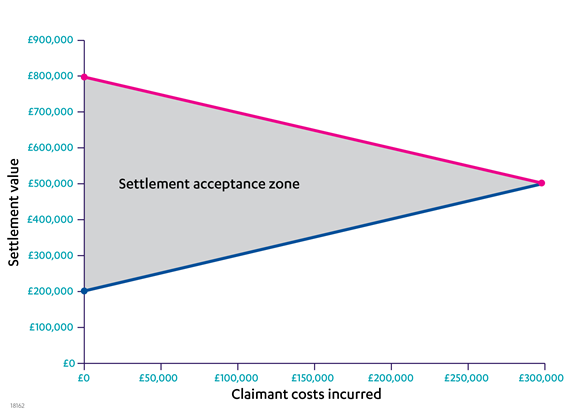 Figure 1 - Settlement graph produced for the 50:50 case where both parties believe they have a 50% chance of being successful at trial (assuming a claim value of £1 million and both parties have expected legal costs of approximately £300k to trial)

Up to now we have not considered the costs that either the claimant and or defendant could potentially recover from the other in the analysis beyond noting that recovery payments will (on average) cancel each other out in situations where both parties agree the prospects of success are 50:50 and anticipated legal spends are the same. As we will deviate from the first assumption in the examples that follow cost recovery can no longer be discounted. In the interests of keeping this article concise, cost recovery payments have been factored into the diagrammatic examples that follow but their workings are not generally set out explicitly.

With that clarification, we now consider the position if the claimant was more optimistic of its chances of success than in the previous example and believes it would have a 60% chance of winning at trial. We will also assume that the defendant is also more confident of its' own chances and believes that the claimant only has a 40% chance of winning at trial.

With these new assumptions we can plot a new settlement graph, which is shown below. 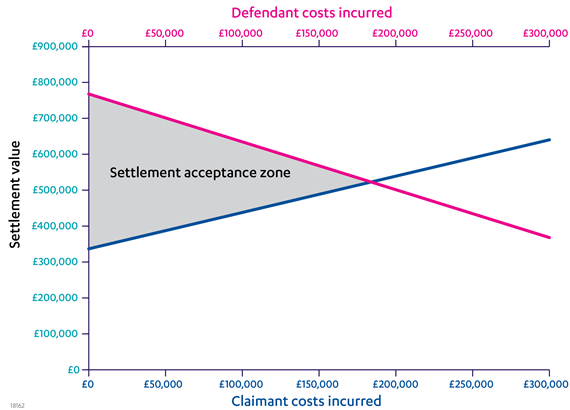 Figure 2 - Settlement graph produced where the claimant and defendant each believe they have a 60% chance of success at trial (assuming a claim value of £1 million and where both parties have expected legal costs of approximately £300k). 1

What is interesting about this new scenario (while the settlement acceptance zone exists) is that neither party actually needs to convince the other that their view of the merits of the case is the correct one in order for the case to be settled. The size of the potential legal cost savings that can be made is sufficient to allow both parties (in their own eyes) to achieve a more favourable settlement than they believe they would get (on average) at court. This also holds true (initially) even if we increase the claimant's and defendant's assessment of the claimant's success prospects to 70% and 30% respectively, as is shown in the graph below. 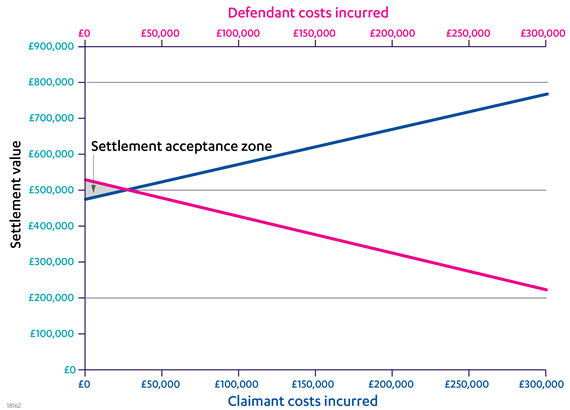 Figure 3 - Settlement graph produced where the claimant and defendant each believe they have a 70% chance of success at trial (assuming a claim value of £1 million and where both parties have expected legal costs of approximately £300k). 2

In each case the mid-point of £500k between the claimant's and defendant's indifference lines remains unchanged because their respective indifference lines have risen/fallen by the same amount as they are both equally more optimistic of their own success prospects. 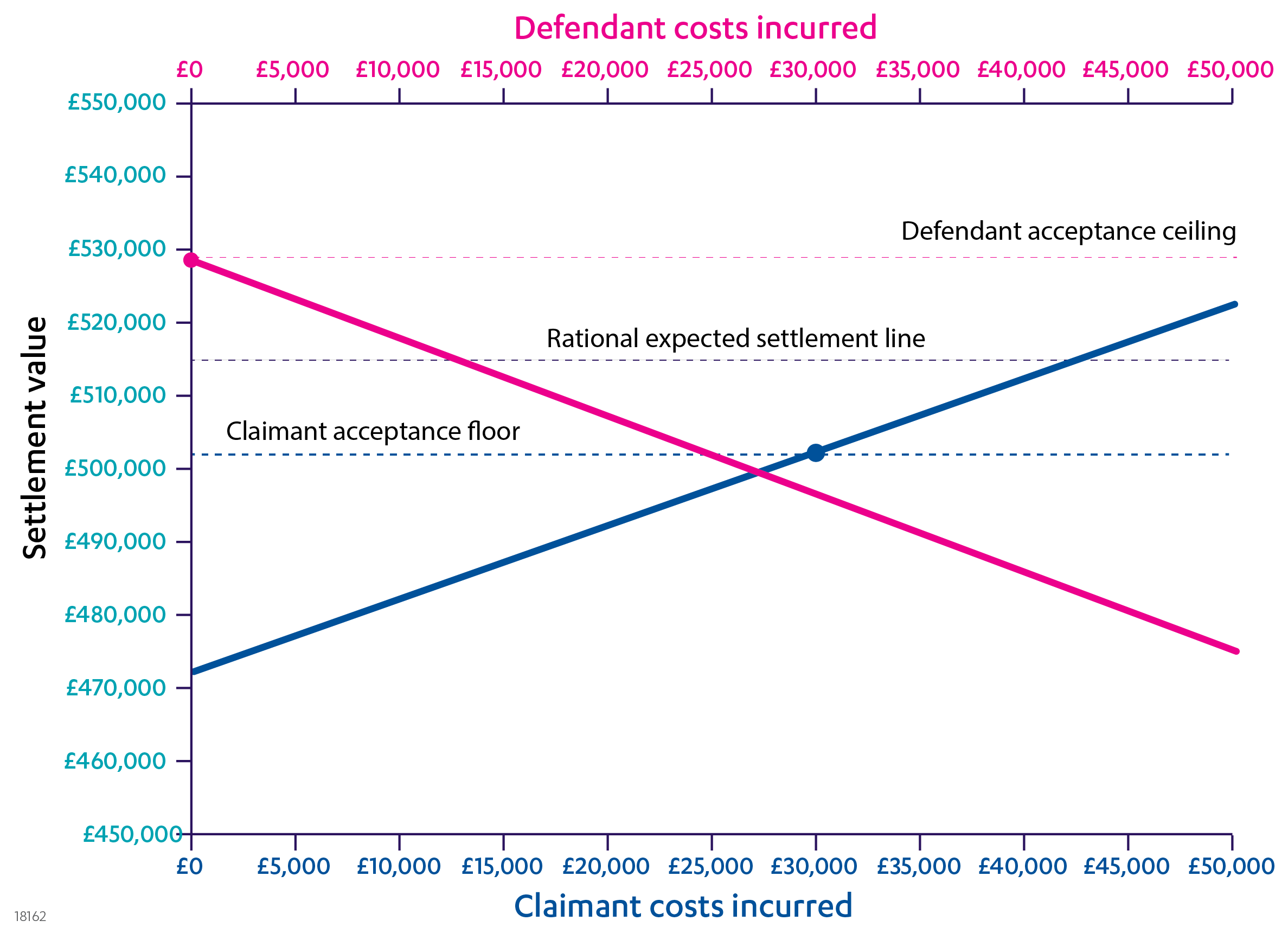 The costs incurred by the claimant and defendant have been marked by coloured dots along their indifference lines and a horizontal blue and pink dotted lines have also been added to show the value the claimant or defendant would be indifferent to settling at relative to proceeding to trial at their current level of costs. We can refer to these lines as the 'claimant acceptance floor' and 'defendant acceptance ceiling' respectively. The point equidistant between the 'floor' and 'ceiling' is the settlement value at which we might expect the claimant and defendant to agree (assuming equal bargaining position strength and attitude to risk). We will refer to this as the 'rational expected settlement line' – which is shown as a grey dotted line in the graph.

Interestingly, the impact of the claimant having incurred £30k in costs has increased the rational expected settlement line (which was £500k) by £15k to £515k. 3

If we consider the overall recovery position for both parties we can see that the negative impact on the parties' positions of the claimant's expenditure is equally distributed. The claimant has spent £30k but as the expected settlement level has increased by £15k its expected recovery position has fallen in aggregate by only £15k. From the defendant's perspective the expected settlement level has increased by £15k so its' expected liability position has increased by that amount. Overall, the claimant's position is likely to be have been strengthened by this turn of events because although the negative impact on settlement positions has been shared, the (unquantified) beneficial aspects of the underlying work carried out is likely to have solely benefitted the claimant.

Of course in our scenario the defendant could spend a similar amount itself and return the position to equilibrium. However, were it to do so would take the claim outside of the settlement acceptance zone (see Figure 3) – which rationally is a less desirable position to be in then than having settled in the settlement acceptance zone. This sets up an interesting tactical dilemma for the defendant as the spending constraint places it at a tactical disadvantage. The lesson that emerges is that if there is no immediate prospect of settlement then it is advantageous for a party to incur costs earlier than its opponent if it can be said to advance its position.

The fact two parties are in a settlement acceptance zone does not necessarily mean that either party should immediately settle. Before considering whether to make (or accept) a settlement offer a party should consider whether spending money on an activity could impact the settlement landscape to its benefit.

To illustrate this let us return to our original 50:50 scenario (that is both parties hold the same view that the claimant's chances of success are 50%) and assume both parties have spent £50,000 each to date. On those assumptions the settlement graph is as below. 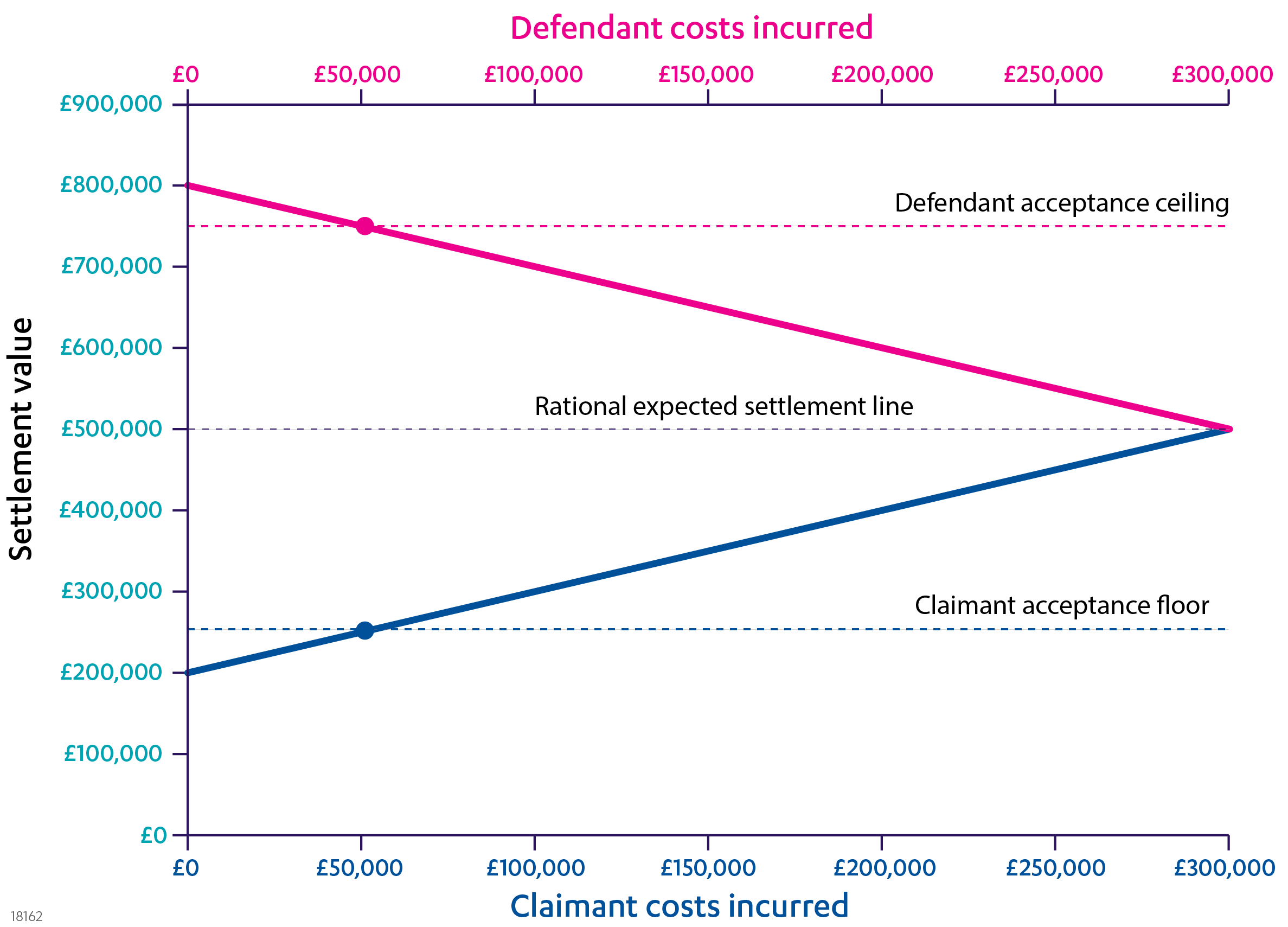 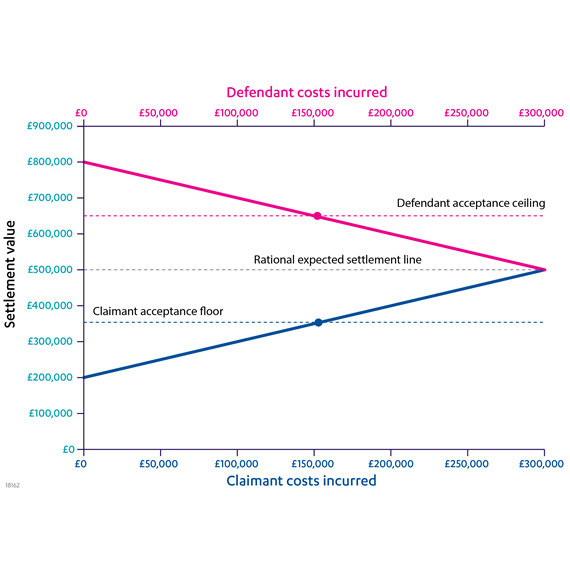 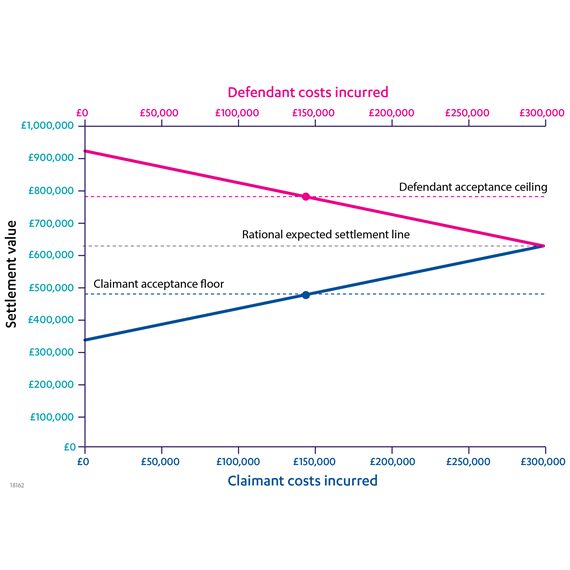 In the neutral outcome (the top graph) the rational expected settlement line remains the same (at £500k). In other words, post disclosure one would expect the parties to settle at the same amount. Were they to do so the overall recovery for the claimant would be £350k (i.e. £500k settlement minus £150k legal fees).

In the 'good' outcome (from the claimant's perspective – i.e. the bottom graph of Figure 6) the rational expected settlement line has increased to £636,000. This means that the overall recovery for the claimant is £486k (i.e. the £636k settlement minus £150k legal fees).

We can obtain the overall outcome by summing over the probabilities (as covered in the previous article in this series), by doing so we get a net recovery figure of £418,000 (i.e. 50% of £350k + 50% of £636k). As £418k is less than the £450k net recovery outcome of not carrying out the disclosure exercise we can see that (on average) the proposed disclosure exercise would not be advantageous for the claimant.

We have seen that it is possible for the settlement acceptance zone to disappear before the conclusion of a case. Identifying the window during which the case is settle-able can be essential to obtaining an outcome that is in the eyes of both parties superior to a court award. We have also seen that, situationally, incurring costs earlier than one's opponent can be tactically advantageous.

We have also considered how a quantitative 'what if?' analysis can be used to assess whether a particular action is beneficial to a party based on a particular set of assumptions. Finally we have also seen that even if an activity is on balance detrimental to both parties if it is on balance more detrimental to one than the other this can potentially be leveraged to negotiate a more favourable settlement.

In the final article in the series we will be looking at how part 36 offers can impact a case's settlement position.