The Court of Appeal recently ruled on an outstanding aspect of the appeal brought by Twentieth Century Fox in the "Glee" trade mark dispute.

The issue had the potential to have much wider implications for UK trade marks since it related to the compatibility of s.41 of the Trade Mark Act 1994 (TMA 1994) (which allows the registration of series marks) with EU law.

The claimant, Comic Enterprises Ltd (Comic), has operated live entertainment venues (for stand-up comedy and live music) across the UK since 1994 under the names "Glee" and "The Glee Club".  Comic has owned a UK trade mark for a series of two figurative marks since 2001 which feature "Glee" (the Mark).  The Goliath in the case, media company Twentieth Century Fox (Fox), produced the well-known American television series "Glee" which was first broadcast in the UK in late 2009.

The history of the case, including the High Court decision and the earlier Court of Appeal decision are recapped below, but the key point at issue in this most recent Court of Appeal hearing related to the validity of Comic's marks, which were registered as series marks under s.41 of TMA 1994.  The marks in question are shown below, and are identical except that the first mark in the series claims the colours red, black and white as an element of the mark. 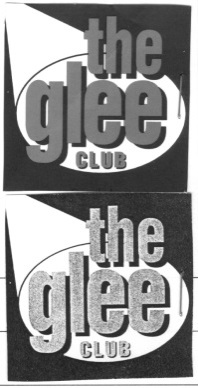 S.41 TMA 1994 is part of the "Registration" provisions of that Act, and a series of trade marks is defined as "…a number of trade marks which resemble each other as to their material particulars and differ only as to matters of a non-distinctive character not substantially affecting the identity of the mark" (s.41(2)).

Fox contended, in a point which is of more general importance, that series marks themselves are in fact incompatible with the requirement under EU law that a trade mark must be a single sign which is capable of being graphically represented in a clear, precise, unequivocal and/or objective way (Articles 2 and 3 Directive 2008/95).

Comic issued proceedings against Fox in September 2011, claiming trade mark infringement under sections 10(2) and 10(3) of the Trade Mark Act 1994 (the Act), and passing off.  At the 2014 High Court trial, the Judge ruled that the "Glee" television series did infringe Comic's Mark but dismissed the claim for passing off.  Both parties appealed the decision: Fox against the findings of trade mark infringement and Comic cross-appealed the passing off decision.

The February 2016 Court of Appeal Decision

In February of this year the Court of Appeal rejected both appeals, and upheld the High Court's decision.  It confirmed that (i) "wrong way round confusion" aided the Court in deciding whether there was a likelihood of confusion in light of Fox's actual and threatened activities; (ii) that there was a degree of similarity between Comic's Mark and Fox's use of the word "Glee" sufficient to amount to trade mark infringement; and (iii) that the similarity gave rise to a "link" in the minds of consumers which caused those who did not like the TV series "Glee" to change their behaviour to the detriment of Comic.  The Court recognised that Fox had adopted "Glee" in good faith, but there had nonetheless been damage to the reputation and distinctive character of Comic's Mark.

Comic also failed in its cross-appeal for passing off with the Court of Appeal emphasising the distinction between confusion and misrepresentation – the latter being a prerequisite for a finding of passing off.  The Court of Appeal agreed that Comic had established goodwill in "Glee" in respect of its venues at the time of the TV series launch but the subsequent confusion was not sufficient to make out misrepresentation by Fox.

An interesting aspect of February's appeal hearing was that, late in the day, Fox also raised the additional point relating to s.41 of the TMA 1994, which governs the registration of series marks.  The challenge had the potential to have a significant impact on proprietors of series trade marks since it threatened the very legality of those marks.  The Court reserved its decision on this point, until this most recent Judgment, in order to allow evidence from the Comptroller-General of Patents, Designs and Trade Marks (the Comptroller-General).

Court of Appeal decision on compatibility with EU law

The Comptroller-General provided evidence that a series of trade marks registered under s.41 TMA 1994 are in fact a series of individual marks which must each comply with the requirements of Directive 2008/95 in order to be valid.  He argued that the registration of marks as a series of marks is simply an administrative process which does not result in additional rights.

Lord Justice Kitchin (followed by Lord Justice Lloyd Jones and Lady Justice Arden) accepted this analysis, and held that even though there is no provision in EU law that allows a series of trade marks to be registered, this does not mean that the registration of series marks under the TMA 1994 goes further than EU law (i.e. tries to create a new or additional trade mark right).  The invitation to refer the question to the Court of Justice of the European Union was declined.

The Court of Appeal's confirmation of the legality of s.41 TMA 1994 will come as a relief to proprietors of series marks.

More generally, this decision may encourage registration of marks in this way, since (provided they are sufficiently similar to meet the qualifying conditions set out in s.41 TMA 1994), such marks are individually entitled to the protection afforded to every trade mark under EU law, and being able to register and renew such marks as a series provides administrative cohesion and consolidation.  As a practical matter, an application for a series of marks can include up to six marks.  The first and second marks are included in the application fee, but any additional marks require a further fee to be paid.