The value of court cases and cash directly held by UK litigation funders hit a record high of £1.9bn last year, up 46% from £1.3bn in 2017/18, says RPC, the City-headquartered law firm.

Assets held by litigation finders has increased four-fold over the last five years, up from £378m* in 2014/15 (see graph).

RPC says litigation funding has become increasingly popular amongst corporates and individuals as a means to pursue legal claims without having to risk their own money to fund cases. Litigation funders pay the costs of legal claims in exchange for a share of any damages awarded.

In the event that they lose their case, the litigation funder or an insurer also pays the defendants’ legal fees.

Growth in litigation funding comes as private equity, hedge funds and family offices have invested more heavily in the asset class. A key attraction is that returns from litigation funding are uncorrelated with mainstream assets, such as equities or bonds, which helps to diversify portfolios.

Geraldine Elliott, Partner at RPC, says: “There is growing recognition amongst businesses of the benefits of partnering with a litigation funder. Funding deals allow claimants to pursue a claim with limited financial downside.”

“But the growing amount of capital litigation funders now have to deploy means they are running out of more obvious cases to fund. As a result, they are interested in kick starting cases from scratch. This can involve funders looking for a potential group action that they get off the ground, using heavy publicising of that case in order to gather more claimants.”

These actions are an attractive type of dispute for litigation funders as they can lead to very large awards. For example, around 90,000 individuals in the UK have started legal action against VW over whether the carmaker fitted some of its popular diesel models with emissions defeat devices.

Competition amongst litigation funders to finance a limited number of cases means many have been forced to look further afield than the UK to deploy capital.  The broadening use for litigation funding of arbitration cases in Singapore and the piloting of this funding for certain types of cases in Hong Kong means these markets could be seen as new areas for growth.

Geraldine Elliott adds: “Litigation funders have plenty of new firepower, but many suffer the same problem – not enough cases to finance.”

“In order to satisfy that demand for cases, litigation funders and law firms are now looking at areas where large financial damages can be shown to have been caused by the wrongful actions of deep-pocketed corporates - such as price fixing by a cartel. For corporates who might face these claims, this is an innovation they need to bear in mind.”

“Class actions are on the rise globally so that could feed through to more opportunities for litigation funders in the future. This is being driven by a mixture of factors, including the growing number of governments authorising this type of finance.” 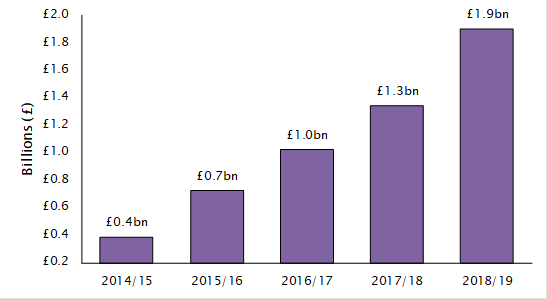