UK product recalls reach new high - up 48% in a year

Whilst new EU legislation on the labelling of food allergens has helped propel a jump in food and drink recalls (see graph), there have been increases across all broad categories of product recalls, including:

The number of recalls of food and drink products where potentially dangerous allergens had not been properly labelled increased by 62%, to 144 in 2015/16 up from 89 in 2014/15, following the introduction of new EU legislation.

The legislation introduced in December 2014 by the EU requires all food labels to display information on 14 different allergens. These new food allergy laws have led to a growing number of products, which fail to meet these labelling requirements, being recalled.

RPC says the costs of recalling a product are significant and include; advertising; the transport of products; the destruction of products; and any associated legal fees. Businesses may also suffer from loss of customer loyalty and reputation, which are more difficult to recoup.

Several retailers were forced to recall products last year; for example, Lidl recalled its “Alesto Honey Peanuts” because ‘peanut’ was not declared in English on some packets, while Tesco had to recall its ‘Multi-seeded Bloomer’ for not specifying that the loaf contained sesame seeds.

Gavin Reese, Partner at RPC, says: “Businesses are starting to feel the effect of the EU’s tough new laws on the labelling of food allergens. In addition, it may be that businesses are being increasingly sensitive to the risk of mislabelled allergens following a series of recent tragic deaths caused by nut allergies.”

The high number of food and drink recalls might be partly caused by the more stringent and effective testing of products. Manufacturers and retailers may now be more willing to recall products earlier to limit any reputational damage caused. 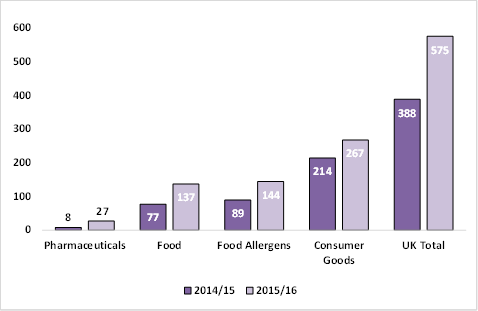 Cars and electronics accounted for majority of Consumer Goods recalls

The high number of motor vehicle recalls could be due to the increasing complexity of cars and their reliance on electronics and software programmes. This complexity may mean there is a greater chance of faults.

There were several high-profile recalls of motor vehicles last year. For example, Vauxhall had to recall its Corsa D 1.4 Turbo model because it posed a fire hazard, while Land Rover had to recall its Discovery Sport and Range Rover Evoque models due to an electronics problem which meant the engine could cut out at any time.

In the electrical appliances and electronic goods category there was also a particularly high number of recalls, including the popular Groundspeeder hover board.

Gavin Reese adds: “Regardless of the product, recalls can be very costly to businesses. This is because recalls can result in a loss of market share both during the recall itself and once the dust has settled, when reputational damage becomes clearer.

“Product recalls in the UK are at an all-time high. Businesses are having to navigate an ever tougher regulatory landscape and they must be careful not to fall foul of regulators.” 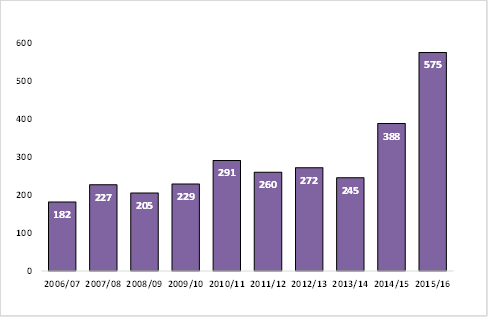 *RPC product research is based on information from the Trading Standards Institute, the Foods Standards Agency, RAPEX and the Medicines & Healthcare Products Regulatory Agency. Research to end October 2016.