Game theory and the art of litigation strategy - Article 4

This article that will - with the help of game theory and a little computational modelling – consider what a litigant's optimal settlement negotiation strategy should be, specifically how aggressively they should bargain with an opponent.  It will build upon the framework established in the previous trilogy of articles on this topic published last year (which can be found here, here and here) which visualised how litigation settlement works and illustrated how it can become harder to settle a case the further towards trial it progresses.

So is it better to be uncompromising and bargain aggressively or be less aggressive and pragmatic? Read on to find out more.

The most well-known scenario in game theory is the Prisoner's Dilemma, where two suspects in police custody are offered the opportunity to betray the other by testifying that the other committed the crime. The irony in the scenario is that if both decide to betray the other they are both worse off than if they both stayed silent.

Less well known is the Hobbesian Trap.  Imagine two nations A and B, which must both decide whether to mobilise for war. Mobilising is costly (both in resources and the heightened prospect of war) but potentially advantageous if the other nation does not mobilise (because of the resulting power differential). However, if both nations mobilise neither is happy, as both will have incurred costs and heightened the risk of war without achieving any relative advantage.

We can represent this situation using the table below (which is known as a payoff matrix) where the numbers represent the relative payoff to each nation for each possible outcome. (Nation A's payoff is shown on the left of each cell and nation B's on the right of the same cell.)

For the purposes of this example we assume that the costs of mobilisation (-2) are greater than the disadvantage of not being mobilised when the other nation is (-1). The corresponding advantage to being a mobilised nation dealing with a nation that is not mobilised is assumed to be (+1).

If we start from a state of affairs where neither nation is mobilised, both nations have a pay-off of zero (bottom right of the matrix). However, this state is unstable as each nation has an incentive to change its position and mobilise which – assuming the other nation does not also mobilise –takes its payoff to +1 (the bottom left and top right of the matrix). Unfortunately this 'greed' incentive can result in both nations mobilising, which results in a mutual mobilisation scenario (top left).  This is the worst of all positions i.e. a Hobbesian Trap.

However, if we were to start from a position of mutual mobilisation the position resembles the game of chicken – another game theory staple. In a game of chicken two cars accelerate towards each other hoping that the other will swerve away before the cars crash; if your opponent swerves and you do not then the pay-off is high whereas if neither you nor your opponent swerves the pay-off is rather less good. In the mutual mobilisation scenario, we can think of a swerve as demobilising.

As this article progresses we will consider how these scenarios could inform our understanding of litigation settlement negotiations – but first a quick recap of the framework built up in previous articles.

In summary, the key principle underpinning settlement analysis is that by settling a case (rather than taking it to trial) collectively both the claimant and defendant save the costs that would otherwise have been incurred in bringing a matter to trial; that cost saving can potentially bridge the distance between the two parties' views of what the case is worth (i.e. the claim value x probability of success, adjusting for potential costs awards).

Previous articles introduced certain terminology which will be used again in this article but which is quickly summarised below:

A graphical representation of these concepts is show below: 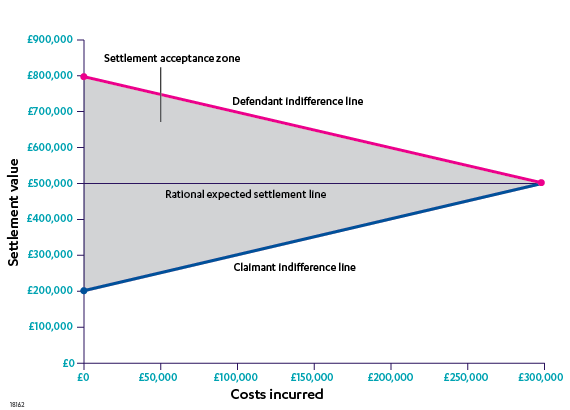 Figure 1 – Graph illustrating the claimant/defendant indifference lines, the settlement acceptance zone and the rational expected settlement line for a £1m case with a 50% chance of claimant success with both parties likely to spend £300k to take the case to trial

We now have all the tools we need to start to consider what the optimal litigation settlement strategy for a lawyer to adopt might be. In this context 'settlement strategy' means the level of damages the claimant/defendant will accept/pay out and how aggressive that level is relative to the settlement acceptance zone. To do this we will consider 5 different settlement strategies below ranked on an aggression scale of 1 to 5.

Taking the claimant as an example, the graph below shows the point above which it would be willing to settle at different settlement aggression thresholds (please note: if the defendant's perspective were being considered Level 1 would start at the top). 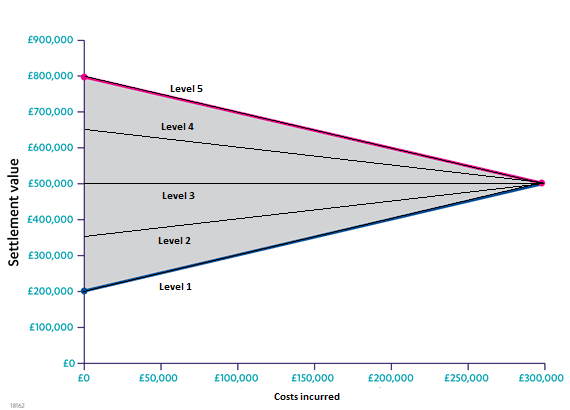 The caveat to the above is that one does not know what one's opponent's indifference line is as it is based on their subjective view of the prospects of success of the case.  Given this limitation we will assume for the purposes of this article that a party will assess that an opponent has the same view of the prospects for the case as they do.

Measuring the outcome of a given litigation settlement strategy

To measure the effectiveness of a given strategy it is necessary to model and simulate a large number[1] of cases pitting each aggression strategy against one another.

To approximate the fact that in litigation one's knowledge and ability to accurately assess the likely outcome of the case increases over time we will split the cases into four stages where each parties level of knowledge increases at the end of each stage:

Each simulated case will randomly generate a claimant probability of success in the range 30%-70% (which over the spread of simulated cases means the average chance of a claimant winning a case will be 50%). We will also assume that that the claim value in all cases is £1m and each side's legal fees to trial would be £300k.

Running the numbers, the average net recovery from the claimant's perspective is as follows:

If we take Figure 3 and check what the claimant's best (vertical) response to each level of defendant aggression (along the horizontal), we get the following (with the optimal result boxed/ in bold in each case):

The same trend is reflected in the defendant's recovery graph (this time you have to consider the defendant's best horizontal response to each vertical claimant aggression level).

This trend can be summarised in the table below (the result is the same regardless of whether one is claimant or defendant).

We can take the analysis above one step further and consider how rational adversaries will engage with this settlement landscape.

Knowing that the optimal level of aggression response to any aggression level from your opponent is in the range 2-4 there is no reason why rationally either the claimant or the defendant would adopt an aggression level of 1 or 5 so we can discount them and the table reduces to the following:

In the reduced form we can see that the range of optimal aggression has now shrunk to 2-3. This is because level 4 is only optimal if one's opponent has aggression level 1, which we have seen they are unlikely to adopt. Eliminating level 4 from the table as well reduces the table to the following:

Putting in the Claimant's expected recovery values at these levels of aggression produces the following:

By way of explanation for the table above – taking the 2/2 example – the claimant's average outcome is a recovery is £424k which reflects the fact that in those conditions it generally is able to settle at the end of litigation stage 1 (after which c. £75k costs have been incurred) for an average settlement of £500k. Similarly the defendant's average outcome is loss of -£576k (i.e. the £500k average settlement plus c. £75k of costs).

Here we come full circle if we return to our Hobbesian Trap example and think of aggression level 3 as being the equivalent of mobilising and aggression level 2 as being not mobilising.  As can be seen from Figure 7, a level 2 / level 2 (demobilised) scenario is much better for both claimant and defendant than a level 3 / level 3 (mobilised) scenario. Here the desire to be more aggressive and hold out for a better deal conspires to produce a worse result (for both sides) than if both sides were less aggressive.  In fact, the negative of this is more acute than in the original Hobbesian Trap scenario as the potential gain from being aggressive is small (c. £15k – £30k) relative to the cost of a level 3 / level 3 scenario (c. £90k).

The analysis illustrates the potential dangers of adopting an overzealous approach to get the best deal for one's client. The best litigators will be able to weigh up the value of any additional concession that might be achieved against the time cost of achieving it and be mindful that too aggressive an approach could end up costing the client (much) more.

Ultimately any analysis is only as good as the underlying model which is necessarily based on a number of assumptions. However, it is hoped this article provides an alternative perspective on settlement strategy and an illustration of how to address a problem by thinking about it in a strategic context.